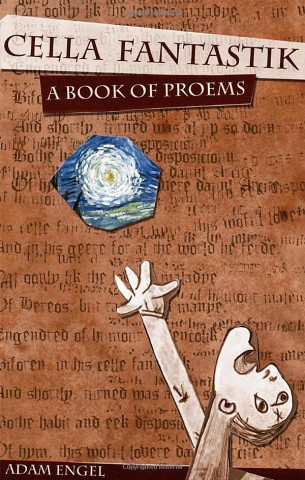 Adam Engel has been writing for many years. In 2010, he published his unparalleled collection of essays, written during the early years of the Bush/Cheney “administration,” I Hope My Corpse Gives You the Plague: My Life in the Bush Era of Ghosts. The year before that, he published his linguistically stripped and poetically dystopian novel Topiary, a book distilled from ten thousand pages that had been written over more than a decade. Not so much as a calendar-year after Corpse, Engel now brings us another book, another kind of book, Cella Fantastik: A Book of Proems.

Flip it open to any page and you will find treasure of one unexpected and riveting kind or another. What’s there will always be real and true, always compelling, and always conscious of the literary tradition it comes from—and always rigorously and intentionally different from that.

In the piece of writing that The Oliver Arts & Open Press has adopted as its “Manifesto,” Engel wrote:

“We are in a serious crisis, not only ecologically and economically, but culturally. The novel is dead, poetry has been marginalized. But literature must live if we are to retain what remains of our “humanity,” or the noblest traits of it. In order to live, literature must grow and change, as the novel has not since the early 1980s and the poem has not, significantly, since the late seventies’ experiments of the LANGUAGE School, the significance of which is debatable. Just as a relatively small star expands at the end of its life many times its natural size to become a Red Giant, then collapses into itself again and again by orders of magnitude until it becomes a cold rock, perhaps the size of Manhattan, so dense that a teaspoonful of it dropped on the earth’s crust would collapse the planet like an egg, so must 1500 page tree-killers, like David Foster Wallace’s Infinite Jest, be dense-packed into one-to-twenty pages of “highly concentrated” prosody. Not into “synopses” like Cliff’s Notes, but impressionistic portraits in the “colors” of sound and vision, like Gertrude Stein’s Matisse and Picasso. Printed words have been studied as “object-oriented technology” for several hundred years. For, like the computer variable or object (or DNA), every word carries within it a history of its own use and meanings in the form of etymology.”

Keeping in mind this degree of awareness of the crushing strictures of our own time, of the nature of what literary expression has achieved in the past, and of the emptiness of much of what it is “achieving” in the present, look into Cella Fantastik.

WHAT THE TITLE “CELLA FANTASTIK” MEANS AND HOW TO PRONOUNCE IT